I was going to write about pie. We made one yesterday and I still can’t move and now it’s all I can think about. Pie. But have you ever tried writing about pie while listening to Miles Davis? It can’t be done, even about a really memorable pie. You start writing about pie while listening to Miles Davis and stuff gets weird. The pie stops being something you made on a Sunday afternoon with Bake-Off on in the background and becomes something you once devoured with your bare hands in a Manhattan diner on an accidental night out in 1952 with a grizzly four-piece from the Bronx after they made you smoke that funny cigarette and you all ended up sleeping in a bathtub in Greenwich Village. And that never happened, it’s just that Miles Davis makes you feel like it did. The tinker.

I’m not just casually dropping Miles Davis into a column so you can be all like “Oh, jazz lover are you, Sadie?” and do that little associative link that people make with jazz like you must either be somehow culturally enlightened, or cerebrally developed like loving Jazz is a little extra tail flicking off the end of your DNA helix, along with other genetic distinctions like being able to curl your tongue in half and loving Marmite. No. I’m not responsible for this morning’s music pick. I can’t take credit and so nor can I take the blame. I’m being pummelled by the frenetic stabs of something on the more freeform side of things and it’s making me feel a bit mental this Monday morning if I’m honest. Miles Davis is making me twitch. I’m getting about five words down at a time, nothing on the wonders of pie at all, and then glazing over staring at the turntable spinning, my eyeballs all wide and oxygen-puffed, the steady bob of the needle like a musical woodpecker chipping into my temporal lobe and meddling with the natural order in there. If there is any.

I’m not dissing though, man. I can do jazz. I like a bit of jazz. I love the dirty sounding speakeasy stuff from the twenties and thirties, I like the smooth swaying stuff of the forties, Glenn Miller is a peach, Chet Baker makes me go woozy, I’ve tapped my feet to a shedload of live jazzy stuff down the pub and haven’t even been drunk. And I’ll definitely remember this Miles Davis album for when I need to write a character who’s having an intellectual breakdown at a posh Uni or a very tumultuous love affair that ends in one of them cutting all their hair off with a bread knife and running down the street half-dressed before drowning in a stagnant canal. For that it’ll be great. Man.

Choosing an album to listen to must be one of the sweetest things in modern life, a beautiful melding of the conscious and subconscious, a fusion of choice and abandon, of change and nostalgia, celebrating an old familiar thing or discovering something new, making a new friend. But when you’re at the mercy of someone else’s choices – pub jukeboxes or moochy mornings at home with someone else at the helm of the record player – the needle becomes a rudder of your mood for the next hour, and the ride isn’t entirely yours. But it’s nice giving in to the bends and sways of someone else’s journey, your brain in the sidecar, the wind in your hair.

So I was going to write about pie but it didn’t happen. And now the record’s been switched and Carole King’s on and I feel like I could maybe write about pie after all – a sad pie – dark cherry – the kind you stuff in one go after breaking up with the love of your life – but I’ve run out of words and that’s probably just as well. 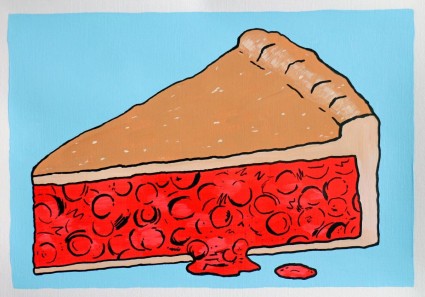