There was a little kerfuffle in the high street this week. Well not in it but about it. Some artists were commissioned to create artwork on the boards covering the BHS windows. They worked their butts off in some grotty weather to get it all done in time for the Christmas Lights Switch-on.

Four window boards now bear the following: “Some things are a dream.”, “Dream wonderful things.”, “People can be wonderful”, and “Be wonderful and dream.” The words were taken from the poetry of one of the artist’s late father, an artist himself.

The response I saw was almost all positive, but there were a few voices of dissent too.

Some people think it an affront to the people who harrowingly lost their jobs and pensions at BHS. Some people think the space is still ripe for political comment rather than a chipper encouragement to move on. Some people thought the sentiment was trite and offensive to people who perhaps weren’t feeling very happy and didn’t need to be told to effectively look on the bright side. Some people queried who got the job, how, and why. And of course all these opinions and the freedom and platforms to express them is what keeps things interesting. We are not all sheep baaing to the same flat note.

But. If we judged every high street billboard or window display or piece of publicly commissioned art against our own lives, we’d all be wailing and roaring. A jaunt down the gamut of the high street’s offerings could conjure a thousand insecurities or sadnesses or discontents with how things are. Are we pretty enough, slim enough, creative enough, popular enough, go-getting enough, clever enough, happy enough. Vegans don’t want to see posters of tender strips of chicken being ripped open to reveal moist flesh, but they’re there. People who’ve just lost a baby don’t want to walk past the Early Learning Centre and see A B C scrawled on a mini chalkboard; the letters their child will never be able to write, but they’re there. Homeless people slump outside as window-dressers plump up beds with stiff clean cotton that will never get slept on; a searing affront to the basic comfort they seldom get to experience. Lonely people pass posters of sequin-wearing bronzed pals quaffing festive prosecco, throwing their heads back and laughing with perfect pearly-whites. The windows are festooned with picture-perfect lives to taunt us.  Everything we see in them can hurt us somehow. There are times when all the life around us seems intent on jabbing us deep, right in the bits that already hurt. Windows are more about the things we do not have than the things we do have. And retailers capitalise on our deepest desires. That is how the big man maketh the money.

We are not all the same. If those four boards outside a now sad and empty BHS – the place I went for my school dresses and cardigans and socks, the place I trawled round on its sad last day before its doors closed and it just all felt horribly wrong – had been given to us all to spruce up, no two of us would have stumbled on the same design. And that’s kind of the beauty of art, isn’t it? Even if we’d willed it to happen by somehow communing our thoughts together, we would never have all come up with the same idea. Words, shapes, colours, style, message. All would have been different. Some may have fallen on the side of cheering passers-by with a sort of obligation to retail Blitz spirit; keep calm, keep on, love, laugh, live, etc. Some may have fallen on the uproar of the times, the ire of the year. Some may have gone abstract, some may have used words, some may have splashed paint, some may have painstakingly painted impeccable detail.  Within the designs would have been hidden thematic layers of love, loss, ambition, desire, fear, and rage. Within the designs would have been whatever spirit makes that artist an individual. If I was an artist and had been approached to cover the boards, what would I have opted for? Given my current mood at the tail end of this shitty year I think it might have been a big wash of black. Or a complete fucking mess of bottle-tops stuck on with blu-tack or something like some sort of Generation Prozac meets Blue Peter.  Thank god I know I am not an artist.

It’s hard to know whether the world most needs our love or our anger. I think it needs both, the love keeps us sane while the anger drives us forwards, but it’s hard to know how to fuse the two together like some sort of swirly light sabre. The onus is on us to contribute to making things better, but how the fuck do we do we do it? If world leaders are getting so much of the big stuff wrong, how do we ordinary folks stand a chance?

Maybe we just start small. We start at the very centre of things and work our way outwards. We start inside ourselves, we get to know what drives our guts and we propel some of it out into the world. We think and we learn and we contribute. We are a part of it all, and that’s important.  I personally found it hard to listen to some people’s opinions about the art that went up on the BHS boards. Because vitriol makes my eyes water and I felt protective of the artists who had made choices and worked hard to bring them to life, with good intent in their hearts, and I think sometimes the better things to judge is the intention that goes into something, not the thing itself. That’s more interesting; that’s the person, that’s the fire inside. Street Art is an invaluable part of our visual world, and it’s an important counter culture to the images the high street in its role as a long shifting gallery curated by rich cunts offers us, that by its very corporate nature just plays on our weaknesses not our strengths; our lack not our haves; our emptiness not our fire.

We’re all carrying an arson of things at all times. Some keep it all inside never to be expressed like a guilty mute secret, often to their own detriment. Some fling it out without thought and damage things rather than add something good, some choose their battles and their words and their counter-attacks carefully, to great effect. As I consider what the right balance of peace and fire is, I think I generally fall somewhere on this: instead of hurling bricks at people, we should build something with them. I think that’s how better things get created, and the world builds itself back up from the rubble. 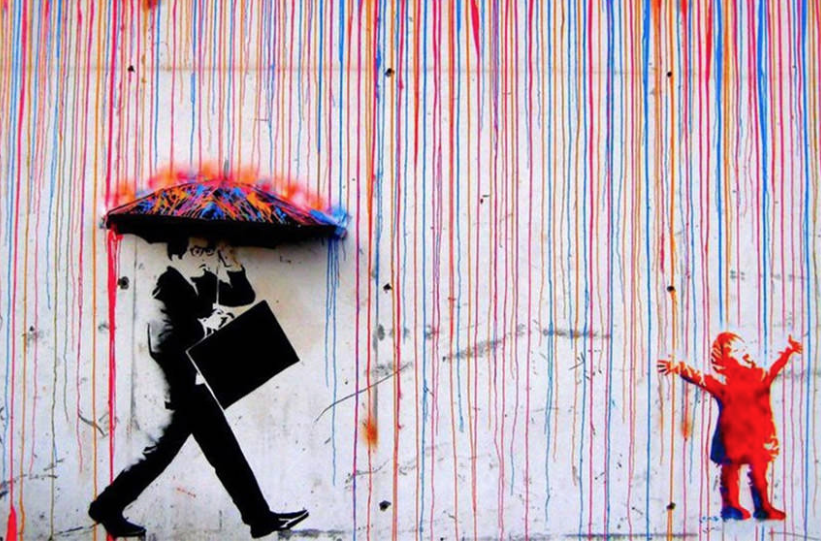