I made myself do it. After days of avoiding the internet, I made myself look at the pictures of the fallen horses of the Grand National. As suspected, it broke me. I know there are pictures of wider-scale suffering doing the rounds every day, but, for me, as examples of pain that could have been prevented by people being better humans, they are just as harrowing as the scenes of war.

But I’ll tell you what is worse than looking at the pictures. It’s reading the statistics of the fatalities. 35 horses have died in the last 50 years. A year with no deaths is considered an uncommon bonus.
And that’s just the Grand National.
There were 27 fatalities on other races held at Aintree between 2000 and 2014.
And that’s just Aintree.
145 horses died on British National Hunt racecourses – in 2013 alone. One year. 145 deaths.

And it’s not getting better in this ‘enlightened’ age.

Since 1999 the average number of horses ‘participating’ in the Grand National has gone up over 25% – from 29 to 40 – worsening the crowded conditions and increasing the likelihood of deaths. So in the interests of greater ‘participation’, and the resultant greater injection of cash for already rich people, we are becoming less humane than at any other point in the race’s inglorious history. Less decent than we were years ago when animal welfare featured low on our social conscience. Less morally invested in the important notion that these horses do not get to choose how casually their lives are risked.
The horses do not get to choose. The horses get whipped.

And it’s not just the death count, though that is deplorable enough.
The deaths just serve to hide the quota of horses who suffer injuries from major to minor, and those who don’t sustain any visible damage but who ‘merely’ suffer from anxiety and exhaustion. Would we deploy our children to a day of ‘fun risks’ with such nonchalance?

And complicity in pathetic excuses is inexcusable; it makes you ugly.

The Grand National is not one of the things that makes this country great or interesting. The Grand National is just another jewel in the crown of privilege still worn by this country of rich men doing whatever they like; the consequences of their questionable actions still being swept under a carpet, which still seethes with centuries’ worth of bodies of the poor, uneducated, innocent, and shackled. People, and horses. Lives. It should be a relic but that carpet still exists. It is not a jolly; it is a blight on our national soul. 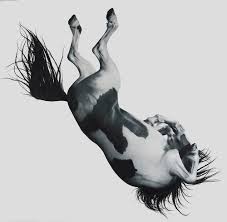