There is nothing quite like reading old diaries to make yourself hate yourself more than you have ever hated yourself before. Especially if that diary covers the last six months of you being 14, and the first six of you being 15. That truly awful age when you’re convinced you have arrived at maturity audaciously fast, when actually you are still a massive wang. (The wangiest you’ll ever be, probably.)

I was however somewhat comforted that, wang though I was, I was beginning to be concerned with the Big Stuff. That being…

BOOZE: “…By this point I’d had two ciders, two Babychams (BABYCHAM?!), a couple of gins and a beer. Even though that’s quite a bit I still wasn’t drunk, just tipsy. Weird! From my past experiences I should have been on the floor, crying.” (No comment.)

INTERIOR DESIGN: “My bedroom is now getting nicely filled up with an assortment of junk. Mum thinks it’s just a phase. Knowing me, it probably is.” (Phase ongoing.)

SELF-ESTEEM: “Why does my nose look so bulbous? In every single picture my nose is disgusting. If I had a normal nose, maybe I could look normal.” (Replace the nose issues with various other body hates – same inner monologue.)

QUEST FOR KNOWLEDGE: “Had to do a science experiment at lunch in GS2. When Mrs Richardson went out of the room Alanna squirted me with iodine, so I tipped some amylase on her head.” (I’ve totally forgotten what Amylase is, so Sadie of the Past – 1, Sadie Now – nil.)

CHALLENGES: “When I got to school I remembered that I had bet Jo a Snickers that I could keep silent all day. I lost. I only made it to assembly.” (Ooh, Snickers.)

FEMINISM: “In double history we learnt about women in the wild west. They were the ones that bloody made America if you ask me. They had to gather dung to burn.” (Yee ha, sister.)

LOVE AND KINDNESS: “Tonight I finally told ***** to back off. He says he’s going to wait til I’m sixteen then marry me. God what a prat.” (Better at dumping idiots back then than I have ever been since.)

ANXIETY: “Had a maths test today, AND I’ve got period pains. My life’s just full of stress at the moment.” (Nowadays, the maths test is a trip to an atm at the end of the month, and my bits still hurt, they’re just older.)

AMBITION: “ATE A LOT TODAY. HOPEFULLY IF I KEEP EATING LIKE A BLOODY PIG I’LL REACH 5’ 9”.” (Should I give this dream up, finally?)

LITERATURE APPRECIATION: “Read a bit more of Jane Eyre. I’m up to page 359 and it’s not nearly finished.” (Reader, I finished it.)

FITNESS: “Went on a really long walk. Knackered. Got drunk. Jumped in the river with all my clothes on. Canoeing tomorrow.” (I CANOED?!)

PHILOSOPHY: “Spent the day in deep thought. It’s amazing how you can spend a whole day in bed, do absolutely nothing, and then can’t think of where all the time has gone because you’ve been in such deep thought. I can’t even think what I’ve been thinking about. Everything I suppose.”

MORE PHILOSOPHY: “Met up with Nina tonight and we went to the Sun Rooms. We had a big heart to heart about love and sex. Pretty soon we were really deep in conversation about politics and anarchy. It was really good. Got a burger. Walked home.”

Oh god, the self-loathing is so palpable you could knit a jumper with it. Then, after reading sections at random, I began to worry I had not actually done much changing in the last twenty years. I just have boobs and an iphone now. And much less time to write a diary. (They call it a ‘column’ after 30.) 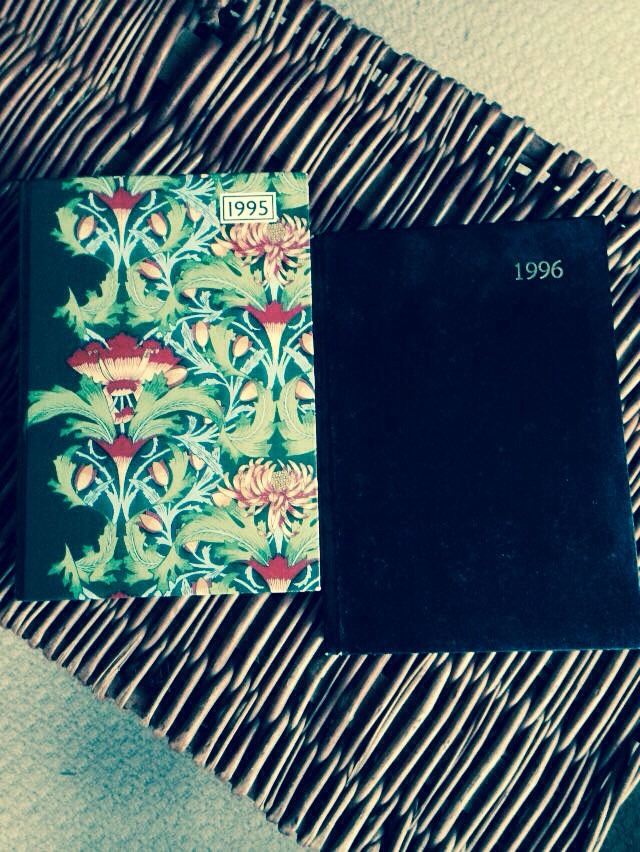