The Nativity. At my old school. Now my niece’s school. It was only natural that Viola, daughter of my sister Laura, should play an angel. I played an angel there. It runs in the family. Actually, Laura had herself played Mary, a step up the celestial ladder from angel but which brings with with it certain creative challenges that I wouldn’t necessarily wish upon a five year old. It’s a lot of pressure playing the mother of the son of god when you haven’t even met god let alone done rudies with him. How do you bring out an intimacy with the lord almighty, yet mix it with a bit of earnest “Joseph, he never touched me, I swear!”, while carrying off shapeless robes, donkey-related bum pain, labour without drugs, and trying not to nut the innkeeper when he says you’ll have to sleep outside with the goats? All before you’re out of your formative years and you’ve not even lost your wobbly teeth yet? I don’t think I could do it. That’s why I was just an angel. You can hide behind the two-dimensionalism of piety, and a ruddy big halo of tinsel. No one really looks at the angels. Because you don’t expect them to do anything interesting. Angels pretty much just stand there.

The fact it took place at my old infant school added a certain emotional frisson to this particular nativity. Which, now that I come to think of it, is probably the first I’ve ever watched since I left infant school myself. By junior school we’d moved on to gruelling re-enactments of Ted Hughes’ The Iron Man, which is bleak as heck, (two of his wives killed themselves for god’s sake, the man was cursed). By senior school I was practically sacrificing cats to Arthur Miller and performing hara-kiri on the school lawn while chanting Beckett. If the Nativity is the setter of our dramatic parameters, you have to go some to beat a lady getting whacked up the duff by a deity.

I sat next to my sister and looked around the hall that now seemed so tiny, (it had seemed so massive back then), and breathed in the last tendrils of school dinner, which smelled just the same. Viola’s class were ushered in and toddled down the front to take their places on the stage. Viola waved at us all the way, and sort of shrugged with pride and “no, I haven’t got a clue what this is about either” as she sat down. She didn’t take her eyes off us. I made sure my face was saying “YOU ARE AMAZING!” at all times, but it didn’t need me to act.

I am not biased at all. My niece was the most beautiful and accomplished angel ever to radiate light on the world. All other angels have just been drab little cut-outs flopping about; rubbish prototypes until she was ready to play The Angel That Shits All Over All Other Angels Everywhere, Ever. (The sistine chapel ceiling was just a thing Michelangelo flung some muck at while he was having a lie-down. My niece was the real thing.)

She didn’t do much admittedly. She had one line, missed her cue, and didn’t seem fussed about the songs. But she was perfect. I really liked her life. You know when you look at a small person and think “yeah – you’ve really got it sorted so far. Keep it up, little dude”? I felt that.
We got home and I didn’t bang on about it too much, she’s not that needy yet.
I just watched her some more; watched her potter around in her little life. Squeezing little toys, pulling funny faces, showing her bum, none of the stuff that makes an angel, but all of the stuff that makes me love her. She was perfect at that too. 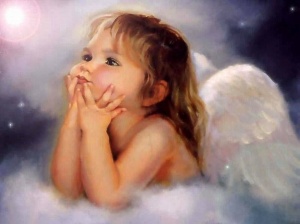