I’ve never written to a rock star before. I feel obliged to come clean straight away and say that the closest I’ve ever got to being a fan is liking some boys who wore your T-shirts in the early 90s. I did however think the guns with the roses emblem was very evocative and pleasingly apt (Guns & Roses – nifty – I get it) – but then I listened to Julian Lennon’s Saltwater non-stop for about a year around the same time so I’m sure you’re not hugely desperate for my approval.

I just wanted to say hi, and to tell you something. For over a year and a half, every morning as I squint at my phone while I’m waiting for the kettle to boil, I see that my column has been read in different countries across the world, and that some of the more exotic hits have come from people searching for you, Axl Rose. Here’s why.

I once wrote a column about being stressed, and my friend telling me it wasn’t worth it; they quoted something you had said – “I don’t worry coz worry’s a waste of my time”. I thought it was a good quote, even if it was from a song about being smacked off your tits on heroin. It actually stopped me worrying for a bit. It had a nice husky Jack Daniels air of authority about it. I listened. Now, when I feel a little weed of worry growing up my leg, I think of your simple rocker’s wisdom and try and ‘rock up’, as it were, and sort myself out.

Because of you, my friend quoting you, and me writing that column, every day I have a trickle of people that find their way to me as a result of typing your name. They read the column of an unknown British girl because they like a cool American icon. They’re probably looking for tour dates or what the hell it was you were up to with that snake in a Kentucky motel, but something prompts them to click on my little site. They probably think I’m a nerd and wonder what I’ve got to say about anything cool like Rock, and they would be right – I am a mere recycler of your lore, and a not very faithful adapter – and afterwards they’re probably very disappointed and click away again tutting – but the interesting thing is that they find me at all.

The internet’s weird isn’t it, Axl Rose? Like for instance, when I decided to write this column I thought I’d look you up. Three seconds later I was reading about your life – about your upbringing, about your Dad, about your success, lulls, and crazy loves. The internet, though it spouts a lot of tripe, also makes us all strangely knowable, across any distance. It shrinks the differences in our lives, makes it possible to be friends with people you’ll never meet, and makes lonely people less daunted by their isolation.

I’ve always liked that ‘six degrees of separation’ theory – that we are never further from anyone than six people. We all link up. No matter how big and bonkers the world gets we’re never far away from each other. You’re with me every morning and we’ve never met – and it wouldn’t be impossible, if you were ever googling something, for you to stumble across me too. That’s pretty cool. It may not be true serendipitous randomness – it may be more to do with search terms and web optimisation and the maths of hits and how far people can be bothered to scroll through the engine’s listings before they find you – but it makes the world seem less big and scary to think of the little unimportant things that can keep us together, no matter who or where we are. S’nice.

Anyhoo, I’ve taken up too much of your imaginary time. You’re probably playing a piano in scuba gear at the bottom of your swimming pool in Malibu. But before I go, I’d like to also take the opportunity to apologise for my karaoke reign of terror a few years back, when – after a lifetime of being too afraid to sing in public, under the influence of sake in Tokyo – I discovered an operatic rendering of Sweet Child o’ Mine that got me laughs. It became my go-to song because I knew I’d get punched less than if I cracked out the Lisa Loeb.
I really hope you’re not psychically linked to your music every time someone ruins it. That would suck.

Thanks for listening, Axl Rose. I would totally give you the universal hand signal for Rock right now if my fingers bent that way without the other hand helping them.

Peace out. (Do you rockers say that or is that just hippies?)

Your secret friend in England,
Sadie Hasler
Columnist/Dog-owner/Karaoke Ruiner of Your Biggest Hit.
(Sorry. But those high notes are asking for it.) 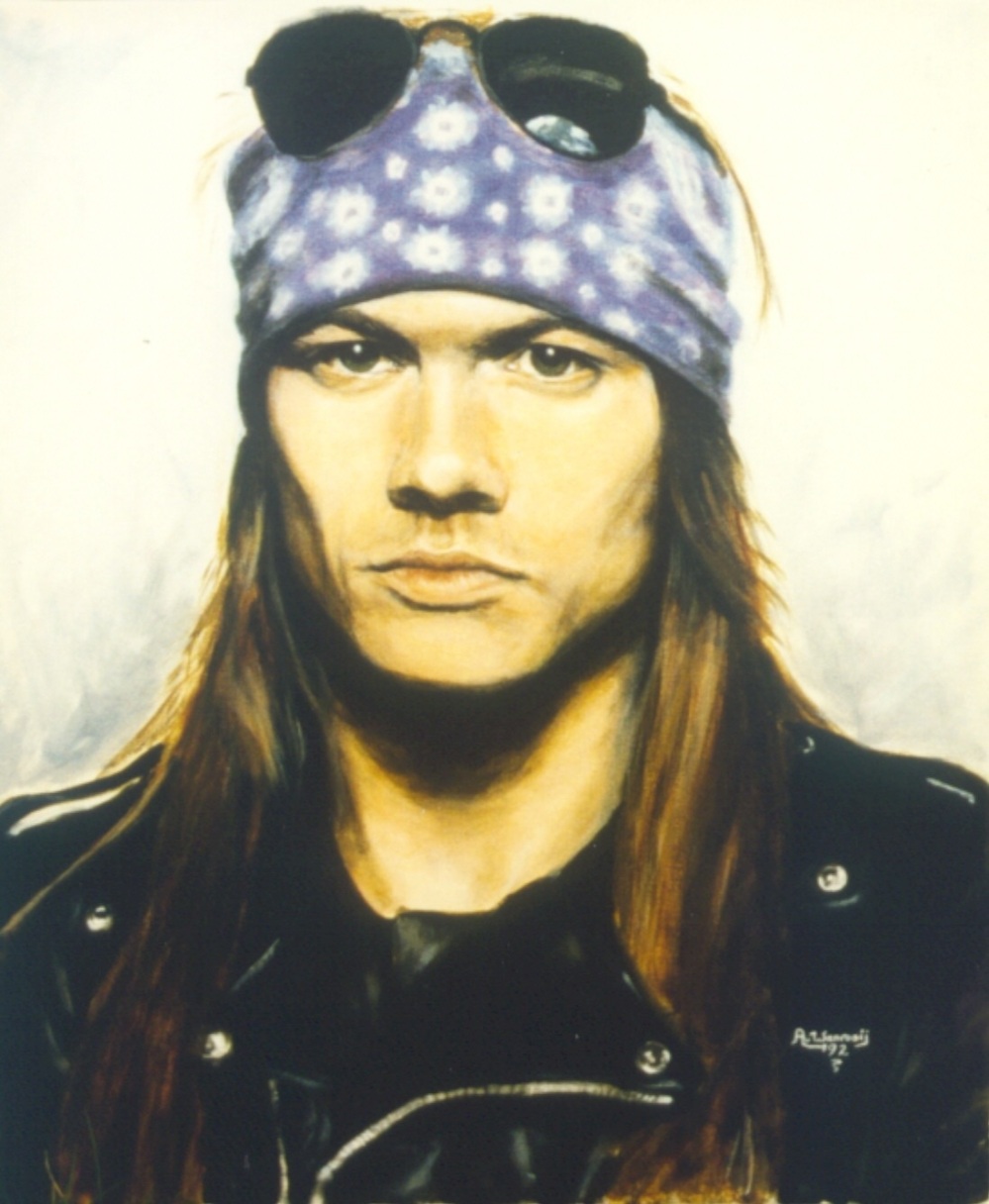