It was about this time last year that I was stood in a giftshop at Washington’s Dulles Airport, looking for a souvenir to try and encapsulate one of the best trips of my life. I’d just spent a week on a ranch in Colorado with my friend Susie, playing at being cowgirls with real cowboys. I’d galloped at the top of the Rocky mountains on a mad horse named Pebbles who seemed intent on killing me, I’d made a garland of flowers and pine cones on a flat rock by a stream as a memorial to my Dad as an eagle soared overhead. I’d swigged smuggled margherita mix from a lemonade bottle while making a load of reserved Christians bellow Bohemian Rhapsody under the moon on a hay-cart. It was one of those trips which couldn’t rightly be named a holiday because it wasn’t just a break away – a pausing of normal life – but a trip which actually helped to move my life on, a trip which spurred a vital shift in my heart. I had broken up with someone a few months before, and was dealing with all the guilt that comes with having the courage to end something that is not right, even when it’s hard. I needed a break, but I didn’t expect what I actually got; an affirmation I was free. It happened slowly throughout my time there, like a slow sunrise in my heart. I left some stuff behind there in the mountains, and I came home fresh and new.

How could I go about choosing a souvenir to sum this up; a trinket that would remind me every time I looked at it of all the strength I had felt in that one week of my life? Gift shops aren’t usually inspiring places. They are cynically-placed tat-lined hubs of corporate opportunism, tricking you with faux-nostalgia to part with extra money. A truly wonderful trip should need no physical reminder; it lives in the heart. But I wanted to prolong every bit of the experience until I had to board the plane which would take me home. (I was also a bit tipsy on the free champagne I’d supped in the first class lounge Susie and I managed to blag our way into.)

The shop was full of the usual stuff – nodding Reagans, ironic bumper-stickers, patriotic mugs with go-getting slogans and Bush figurines that I wanted to ‘accidentally’ smash to the ground with my bag. There was virtually nothing I wanted, but I didn’t want to leave empty-handed. I wanted to spend my last dollars. So in the end, without really thinking why, I bought a White House toothbrush, an Abraham Lincoln fridge magnet saying “It is not the years in your life that count, it’s the life in your years”, and some Michelle Obama mints. I thought if I was going to suck a spearmint, I’d like to do it in the style of the First Lady of the United States.

It’s only now that I see these were the perfect souvenirs. Abraham Lincoln lived in different times. He fought for the abolition of slavery; a battle without which we would never be watching a black woman making a rousing speech such as Michelle did last week to the Democratic National Convention. Some say it was the best speech to have been made in a long while. Only sixty years ago she would have been made to sit in silence on her own section of the bus while people spat the N word in her face. Michelle Obama’s speech was amazing for many other reasons aside from the fact she was there in the first place, but it was mostly amazing because it was still demandeding that thing which is so hard to achieve; change. She spoke of her husband’s grass roots, his dedication and tenacity. She spoke of love and bravery and family values, and none of it sounded trite or overwritten. It sounded true – and it reminded me of the way I felt a year ago, while I was giving my heart a break in America.

“He reminds me that we are playing a long game here and that change is hard, and change is slow, and it never happens all at once. But eventually we get there, we always do.”

I was glad that I had chosen a souvenir with her face on it. I was glad I had made the changes in my life that I knew were right. I was glad I got to ride a horse on a mountain-top, even though I thought I might get hurt. Every time I need to be reminded that from time to time you have to be brave and make things fresh and new, I will suck a Michelle Obama mint. 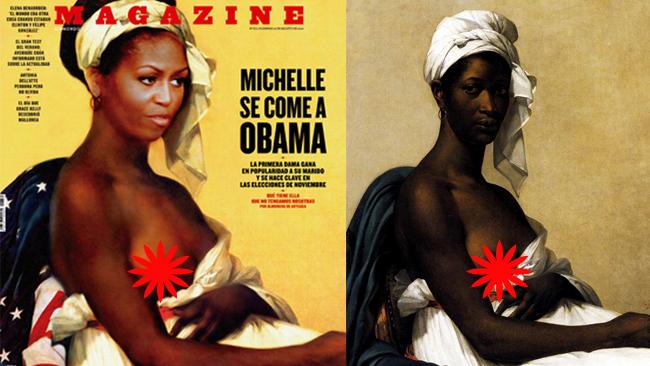