I have a dirty confession. You know that ‘rudey’ book that everyone’s been banging on about (and to)? I read a bit. Yes – after weeks of ignoring the existence of 50 Shades of Grey – of not knowing the author’s name or anything about the ‘plot’ – I finally caved. A friend had a copy on them that had been thrust at them by their sister with the furtive urgent words “Read. It. Now.” and before I knew it I was turning to the first page of the best-selling book in British History, slavering with morbid curiosity. The Best-Selling Book. In British History. By an Unknown Author.

I had palpitations. (Pre-meat sweats?) Could I do it to myself? There was something in supporting the success of E L James’ already legendary tome that made me feel dirty, and I hadn’t even got to any of the fruity bits…

Before I go any further, I will state this plainly now: I am a bit of a book snob. I didn’t want to like the book that everyone is talking about. I suspected its meteoric fame had little to do with its quality. I made assumptions about the writing being poor. I hated the fact that of all the beautiful literature the English language can boast, the number one position had been taken (roughly, like a maiden in a haystack) by something which had been responsible for coining the term ‘Mummy Porn’. What? What is that? The literary equivalent of rubbing yourself up against the washing machine on spin cycle? (Oh. Yes.)

Here was the nation of Austen, Wodehouse, McEwan (a random clutch of accepted greats) – now throwing a new writer around on its shoulders – a lady openly admitting it was just a lot of words giving voice to her midlife crisis and unsated fantasies. It didn’t even have any wizards in it, like that other behemoth that divided the snobs from the mass consumers. At least Harry Potter looked at big themes – good, evil, redemption, mortality – and made poor picked-on ginger kids able to hold their russet heads up proudly. THE WEASLEYS ARE THE COOLEST KIDS IN THE WHOLE OF HOGWARTS. THEY’RE GINGER AND THEY’RE POOR, SO SUCK IT YOU BIG BULLIES. 50 Shades was promising nothing of this philanthropic work, and even seemed to have taken the representation of strong females back a few steps. Was I really about to do this?

I can’t quote the lines which made me fall about because The Echo won’t let me, but let’s just say there are some real delights in there if you choose to wade through the turgid oestrogen. Some real clunkers.

Given the fact that E L James is probably swathed in silk somewhere deep in the Arab Emirates right now picking out which desert she wants to build her new 20 storey shoe-rack on, I doubt she much cares about my reports on her prose. She’s doing alright, the poor rich cowbag. So I can say this: the fact that she has reached the top of the list is an absolute abomination in the heritage of beautiful words. The raping of a craft. BUT. It is wonderful news for the book industry. Because it means people are still buying books – still want to get lost in actual pages, still want to make paper go crinkly in the bath, still are sighing at the power of the written word. Like women sighed (and still sigh) at Charlotte Bronte’s Mr Rochester or Austen’s Mr Darcy. Like women sighed (and still sigh) at Darcy and Cleaver in Bridget Jones. Women are really digging this mysterious Mr Grey and his predilections.

Despite my personal tastes, and the fact I will never ever read any more of the saga unfolding like a cheap new shirt between uber-rich dirtbag Christian Grey and the formerly-virginal hard-buttocked Anastasia Steele – I am glad of anything which turns books and publishing into one of the biggest and most compelling stories in the media. I am glad that people are desperately riffling through pages before they get to work, their eyes racing along the lines of someone’s imagination. Reading is reading, and books are important, and must never be lost to technology or illiteracy. That intoxicating hunger you feel when you’re barely able to talk to others or do basic tasks because your nose is stuck in the sweet-smelling thighs of a book is a joy I wish everyone felt every day, and I congratulate E L James for creating it in others. I’m a bit jealous, frankly. 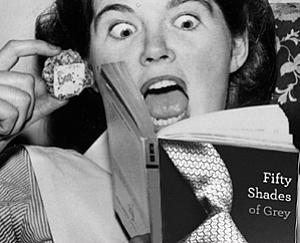