Here’s a little story for you. It was a bright morning a week or so ago, the sea-breeze danced, Dusty Springfield played on my ipod, and I was feeling liberated in yellow. For a wee while I felt like I was prancing along in the 60s. I stopped to sniff flowers, I might have kissed a stranger on the nose if they’d said hello. My dog Cooper trotted happily beside me, snuffling at the morning’s new smells. It was a good morning, chompable as a fresh bun. Until I got to your house. When I got to your house I heard screaming so heart-piercing I froze to the spot. A little way up, a woman was wailing and trying to drag her King Charles spaniel across the street. Why was it such an arduous task? Because attached to the side of her tiny dog was the lumbering growling hulk of a big black brute. Her poor dog was being shaken like a rag-doll while she cried for help and tried to drag it out of the steel-jawed grip of your robo-hound.

What I did next made me feel like an absolute louse all day. I did nothing. The only instinct which kicked in was to protect my own dog, by hiding him behind a parked car. I stood and watched as the woman struggled and cried. Then it was as though a switch was flicked on the black dog – it dropped the spaniel and swaggered off to your fence, where he stood, neck craning and eyes wild. A panic-sodden minute passed as I waited, then your dog punched its way back through a flap in the fence and disappeared, into your garden. I ran up to the lady, and quickly reassured her that her dog was, miraculously, only covered in drool and not blood. I have no idea how it was still alive. We stood chatting while she calmed down, and I left her talking to some community support officers who called the police. I got to work, broke down in tears, and projectile snotted on my best friend. I felt that awful selfish relief that it had not been me, not my dog.

Now I obviously love dogs, and I actually think a lot of breeds get a bad press because their owners are selfish brainless cretins who don’t train them properly. Some of the soppiest dogs I have ever met have been Staffies and Rotties. Good owners accept that there is a streak of instinct as old as Time itself which runs through all dogs and that it is their job to harness it through hard-work and a responsible attitude. Small dogs don’t have to yap, big dogs don’t have to bite. It takes time and effort, but it’s worth it. Like bringing up decent children.

I refrained from writing this column, until just now – when my (last week’s snot-bespattered) friend Hew texted to say that her colleague’s Labrador had had a similar encounter with the same dog bolting from the same house – except this time blood was drawn. She described the same frenetic attack, robotic switch-off, and fence-punching. When she knocked on your front door, you allegedly said “The dog can’t even get out”. Denial. After two reports in one week, your own beastly instinct was to protect yourself and not others. Utterly despicable.

If you are reinforcing your garden fence as I type, I apologise. If you are permanently affixing a muzzle to your unpredictable mutt, I apologise. If you are currently whispering last rites into the ear of Tyson Sabretooth Chompface VIII as he succumbs to the grip of a kindly poison because you could not bear it in on your conscience if he savaged another dog – or worse, a kid – then I apologise and applaud your morals. But if you are sat at home, playing a ‘harmless’ tug-o-war with your rabid hound, cooing into its psychotic ear and declining to accept responsibility for the actions of a powerhouse breed whose darker streak you have encouraged with your own nonchalance, then I slap your vile face and resent the fact that it is merely in writing that I get to do so.

I walk past your house every day. I was going to change my route, but I refuse to. If you see someone walking with a white dog, flinching a bit and tutting in a very British fashion, it’s me. Hi. I’d like to think I can walk past and know that someone nice lives inside, that they have acted honourably, that my dog and I, and others, are safe.

In short – be a decent human being and sort it out. Thanks. 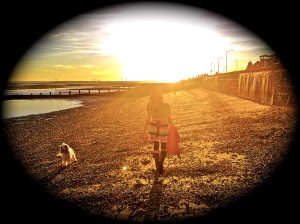