I feel a bit sorry for George. The royal sprog has barely opened his eyes to the light of existence and already is being heckled by the world and his dog. In the first week of being welcomed into immeasurable privilege and all its daunting opposites, things he has no control over are already being scrutinised – even the small stuff. Namely, his name.

By George, I have read reams of rot spouted about the choice of this name. Which I love, incidentally. There are far more modern names being dragged into common useage that leave my skin bristling with that clamminess you get before you puke. I’ll refrain from listing in case I get hate mail from a disgruntled Lambrusco. (Sorry – that one popped out.)

When I was floating around my Mum’s amniotic sac her and my Dad used to call me Fred. A twee little lovers’ joke. They wanted a girl, and pondered Charlotte awhile. And Sophie, and Phoebe. And even Georgina. They settled on Sadie.

I have always liked my name. I like the sound. I like the fact it’s not used much. I like the care that went into it. It can make me feel all sorts of things. I am fiercely protective of it if I hear it being bellowed at a naughty child. I can feel close to a stranger if I hear someone reminiscing about their stalwart Glaswegian grandmother Mammy Sadie, who went without shoes for the kids. I can feel young and sassy or like a melancholy Jewish widow, all in the same hour. It seems to suit a lot of aspects of my character. Have I grown to suit the name, or have I changed its connotations in my own mind to suit what I am?

Would my life have been any different if I’d been a Fred, or Charlotte? Georgina, Sophie, or Phoebe?

What life will George have? What will he see and do, and think and feel? How much of it will have anything to do with his name?

There’s a lot tied up with being a royal George. None of us will ever really understand that very particular sort of pressure (and, whatever we think personally or intellectually about monarchy, we should always give them some thought as fellow human beings, or damn our own selves to wilful ignorance and meanness).

I’m not massively pro-monarchy, though I do think the monarchy are vaguely trying to make themselves more relevant to us while no doubt trying to preserve their clan, as is completely natural; no family wants to run itself out of existence – that would be anti nature. My indignance over royal ‘privilege’ only extends to thinking that some monetary cuts could be made, and some creative ideas applied to the use of their assets so they can sustain themselves better independently, rather than using our tax money when so many other needful things are in a ruddy mess. I mostly feel that having them there is quite nice for the country. They’re a feature. Like a cocky stone cherub peeing into a garden pond.

I wonder if our new George will find his way to being his own George, or a variation on the past. Will he be another dreary offshoot on a chart of disheartening history at school, or a man who can define his age with all the qualities we wish for in a king?

Either way, he has quite a weight already on his tiny fontanelle. I sort of hope we’ll be his friend along the way, especially while he’s just a boy. We all need them, whoever we are. 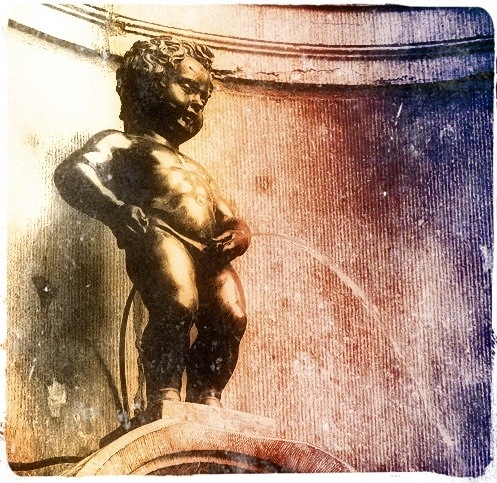