I went to see Mad Max last week. I thought it was going to be about a load of stinky boys racing trucks in a desert and had prepared myself to have a little snooze. When it turned out to be a feminist action movie in steampunk hyperdrive driven by a woman who was aided nominally in a few scenes by some dude called Max who was rather less mad than in need of a wash, I sat bolt upright and strapped the eff in. What a corker. Charlize Theron absolutely stole it from Tom Hardy. Afterwards I wasn’t surprised to find that the director had consulted Eve Ensler, writer of the Vagina Monologues, to ensure he didn’t end up accidentally making a film that had gratuitous boobage or passive female squealing in every other scene. Nice one, Mr Director Dude.

At the end of the film, when they’re all knackered from fighting while driving (“It’s essentially a lot of fighting while driving” – Mark Kermode), after two hours of violence, smouldering glances, and a lot of sand, Tom Hardy bids Charlize Theron goodbye by disappearing into a crowd and nodding. She watches him disappear in the crowd and nods back. And I was like “Say what? Where my kiss? Where’s my closure?”, even though I’m a dead sharp feminist who knows a film can still be good without smooching in it. But it wasn’t the fact they didn’t get it on after two hours of heady murder and on-the-spot vehicle maintenance, it was the fact they didn’t say a proper goodbye. No hug or manly pat on the back, no “thanks for saving my life repeatedly”, no kiss, no promise of coming back. Just the silent kind. A nod, then nothing. It bothered me.

But I kind of get it. Because goodbyes are hard aren’t they?

I’m going to have to say three goodbyes this week and I’m sort of dreading it.
Three of my bookshop chums are all spreading their wings and going off into the world to have adventures. My lovely Sophie is going to teach in Japan for two years. My lovely Kate is going to Thailand for a few months and then on to live in Melbourne, and my lovely Matt is accompanying Kate on the Thailand stretch because he’s been wanting to do something bold and brilliant for ages and needed a ruddy kick up the bum. So three big goodbyes all at once, with no knowing if or when I’ll see Sophie or Kate again. Regular readers of my witterings will know I am a sentimental schmuck who isn’t equipped to deal with such things.

If I try and think of a goodbye that suits, I can’t.

How do you tell them you care without sounding like an idiot? How do you say be open to people and trusting, but not too foolish, and assume that everyone is good, but don’t be too disappointed if some turn out not to be? How do you say be open to love, but don’t look for it, and be careful with your feelings, but not so wary that you won’t embrace it when it comes? How do you say do things that scare you a bit, maybe even the occasional thing that is tantalisingly dangerous but do not risk your life? To say stand near the edge, top, end, deep of things but not get so close you can’t come back, because you are not Charlize Theron in a post apocalyptic road movie and you can get hurt?

I might stand there waving them up the street until my hand drops off, or I might pick something invisible off their shoulder like a mum and try to say something useful like “don’t trust the tapwater, or men with bags of drugs”, or I might cry or mumble something stupid or ruffle their hair. Or I might just nod and walk away. 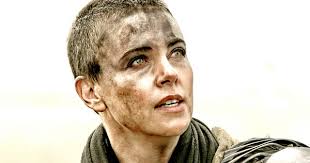 I sort of feel a bit sorry for Seth MacFarlane. The poor love’s probably not had the nice week he was expecting after his little Academy Awards sing-song. Hosting the Oscars is a tough job, fraught with pressure and demanding skill. The temptation to reduce the whole lauded affair to a cheap joke is probably quite potent. Falling back on bathos in his clearly well-rehearsed Busby Berkeley style nod to breasts was possibly even a way of dealing with any latent feelings of inadequacy in the massively prestigious thing he’d been asked to do. Compound with the fact he has been propelled by his Family Guy success into a sort of alternative commentator on society, with probably more reach to the American public than the politicians themselves, a satirical guru who has earned his licence for irreverence and can say what he darn well likes. BUT BOOBS? REALLY??

Charlize Theron’s face summed it all up perfectly as her name was mentioned in the ditty; a disbelieving grimace directed to her date. I wonder if she felt her months of gruelling work creating the role of rape victim and murderer Eileen Wuornos would be so eminently dignified – years after her deserving Oscar win for Monster (for which her willingness to cast off her natural beauty to get fat and ‘ugly’ was more commented on than her spine-chilling performance) – by a cartoon-colouring chump in a suit.

In looking at the coverage on the official Oscars website, I noticed that the main feature was the red carpet pictorial. Who was the most glamorous? I also noticed (by noticed I mean dedicatedly checked by going through each one) that out of the 70 pictures in the red carpet gallery, 19 were of men, and 9 of those men had a woman standing next to them for good measure.

This may have been because all men were wearing exactly the same thing. Black tux, white shirt, black dickie, black shoes. DULLSVILLE. The Gentleman’s Club uniform may be barely worth snapping, but the gals weren’t afforded the same visual anonymity. One of the ‘main stories’ of the Oscars was Sally Field and Hilary Swank wearing the same dress. To my horror I saw it being debated: ‘who wore it better?’ Celebrity websites giggled about it; said that the women probably spent all night avoiding each other. What? I HOPE THEY STOOD TOGETHER AND HAD A RUDDY GOOD LAUGH ABOUT IT. I HOPE THEY HAD A COSMO AND GIGGLED WHILE SWANK DID IMPRESSIONS OF FORREST GUMP’S MUM. Why should they stand apart, while all the men mingled in the subtlest variations of the same suit?

It seems so ludicrous that the awards go to the female actors who play the hardest parts – the junkies, the victims, the sufferers of violence and madness – but that the Academy itself still encourages the vacuity of the surrounding pomp. They would suffer as a brand if they were to award vacuity in art, but would suffer equally if they were to phase out the glamour of the red carpet outside.

It makes you wonder: how can people like Seth MacFarlane blur the lines effectively, or even metaphorically pee over them, if the lines themselves aren’t even clear?

I have just one wish: that one year, just once, all the ladies of Hollywood get together in secret and decide to wear the same dress. The same simple black dress. Maybe ten years of doing that would make the difference. 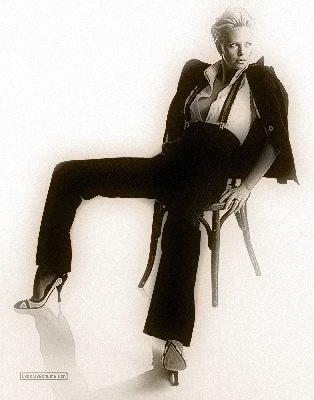